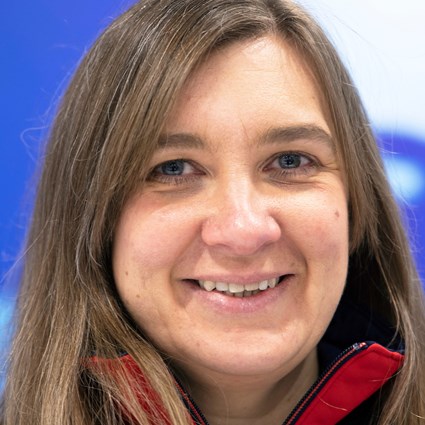 Former world champion Sheila Swan had already begun her coaching career when she was part of Jackie Lockhart’s team which claimed that global success just weeks after their Scottish rivals, skipped by Rhona Martin, had won gold for Team GB at the Winter Olympics.

The 2002 Scottish Championship triumph which earned Team Lockhart the right to go to the World Championships in the USA, was the first of three title successes for Swan, who was again Lockhart’s vice-skip when they reclaimed the national crown in 2004 and she then played second for Kelly Wood when she triumphed in 2005.

Having learned her trade as a coach by demonstrating a formidable work ethic in juggling roles with British Curling, the Royal Caledonian Curling Club, Angus Council and Tayside & Fife Institute of Sport, she enjoyed her first major coaching success with the Scotland women’s team that won the World Junior Championships in 2007.

Swan also had a spell as Interim Head Coach of the Scotland wheelchair team in 2010/11, during which she steered them to a silver medal at the World Wheelchair Curling Championship in the Czech Republic in 2011, in turn securing Paralympics GB’s qualification for the 2014 Winter Paralympics.

Appointed Head Coach of the British Curling wheelchair programme on a permanent basis in 2015, she conducted a rigorous review following Scotland’s relegation to the second tier at the World Wheelchair Curling Championship and subsequent failure to bounce back at the first attempt. That resulted in promotion in 2017 and they went on to claim a bronze medal on their return to the top flight, securing qualification for Paralympics GB for the Winter Paralympics in Korea in 2018 in the process.

Her introduction of personal development plans for athletes further professionalised the British Curling wheelchair programme, leading to the team reaching a first World Championship final in eight years when Scotland hosted the event in 2019 and they narrowly missed out on qualification for the play-offs at the 2020 event in Switzerland.

As Paralympic Head Coach and a member of British Curling’s senior leadership team she has worked closely with fellow coaches to strategically dovetail the Paralympic and Olympic programmes, including the introduction of an innovative event in 2021 which saw wheelchair players compete with able-bodied players from the British Curling’s Performance Foundation programme.

Swan is a member of Glenfarg Ladies and Airleywight Ladies Curling Clubs and when time permits she enjoys competing in the Perth Super League. Away from the ice, she is a member of Piperdam Golf Club and other recreational pursuits include running, in which she regularly takes part in her local Perth parkrun and is planning to include some 10k races into her busy schedule.