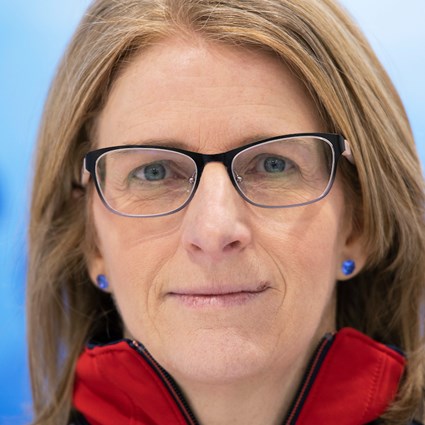 Nancy Smith has been involved in five Olympic cycles in different roles within curling and joined the Performance Programme for British Curling almost a decade ago.

Brought up in the curling hotbed of Lockerbie, Smith has played the game since the age of 12 and was a Scottish champion as a member of Julia Ewart’s rink which then went on to reach the semi-finals of the World Championships in 2001.

A member of a curling dynasty, her mother Marion Murdoch was awarded an MBE in 2017 for her services to the sport, while older brother Neil is a former European and World Junior champion and younger brother David is currently British Curling’s Olympic Head Coach, having won two World Championships and an Olympic silver medal in the course of his illustrious career. The family commitment to the sport was demonstrated after the passing of her father in 2014 when The Matt Murdoch Curling Foundation Trust was formed to provide opportunities for aspiring junior curlers and coaches internationally. Smith is the current Chair of the organisation and Fay Henderson, skip of one of British Curling’s up and coming rinks is one of many who have benefited from the organisation by getting the opportunity to attend a training camp in Canada.

Smith’s working career started out in the administration sector before she worked as a Property Manager and Legal Assistant in a Lawyers firm in Dumfries. Her coaching career commenced in 1999 as one of the first Curling Development Officers, looking after the Lockerbie, Dumfries and Stranraer ice rinks. She then took on the governing body role as National Junior Coach in charge of the junior pathway, successfully restructuring the Under-21 and Under-17 circuit in which she shares her passion to this day.

Working with the Royal Caledonian Curling Club before joining British Curling, she has worked with every discipline on the Olympic programme – men’s, women’s and mixed doubles. Her career has taken her to 24 major international championships, including coaching the women’s team that represented Team GB at the Winter Olympics in Vancouver in 2010 and win silver at the World Championships that year. She also guided teams to gold medal wins at the World Junior Championships in both 2007 and 2008, another gold at the European Youth Olympics' in 2005 and World University Games' silver in 2007, as well as three World Junior bronze medals.

Nancy was selected onto the UK Sport Elite Coaching Apprenticeship Programme from 2014-2016.

As coach to Team Muirhead she helped them win a silver medal at the 2019 European Championships and she has worked with Team Aitken since their formation in the summer of 2020.