Having made a highly successful start to the season, British Curling’s new-look nine player women’s squad will immediately return to action after flying to Russia for their first overseas event of the 2021/22 campaign.

The GB Red line-up of Rebecca Morrison, Lauren Gray, Jen Dodds and Mili Smith put in an exceptional performance on home ice at the inaugural Euro Super Series event at the National Curling Academy in Stirling, beating a world class field, which included both the reigning Olympic and World champions, to the title.

The GB Blue group of Eve Muirhead, Gina Aitken, Vicky Wright, Sophie Sinclair and Hailey Duff were meanwhile the only team to come through the round-robin stages of the women’s event with an unblemished 5-0 record, only to suffer their first defeat of the event in the semi-final.

As the process of experimenting with combinations in a bid to get the very best of the squad continues, there is cross-over between the two teams at the St Petersburg Classic (8-12 September) this week. Last week’s skips –Morrison and Muirhead – will work together this time, alongside Sinclair and Gray, while Aitken skips a five player combination that includes two of last weekend’s winning team - Smith and World mixed doubles champion Dodds - as well as Wright and Duff.

The squad boasts a healthy mix of youth and experience, as exemplified by bringing Morrison and Muirhead together.

“I’ve never competed in Russia before. It’s an experience I’m really looking forward to as they are known for often putting on exciting events,” said Morrison.

“Whilst we won’t have the opportunity to go for another title as a team, I am really excited to play third and try out a different role in the lead up to selections. Even though I’m not skipping there is still a lot of pressure to do well as every game counts.

“I’m feeling great going into this competition. Due to the quick turn-around we’ve only had one day to work as a team, but it went brilliantly and we made the most of the little time we had.

“I think I can speak for everyone when I say we are giving it our all for a win out in Russia and it would be great to really reinforce the weekend’s win with another great performance.”

Muirhead is meanwhile looking forward to getting back into the old routine.

“It’s been a while since we travelled to play in international competition,” she noted.

“Last year we did get the chance to play the Grand Slams and the World Championships, but it’s still not the same as packing your suitcase up and going to a European event like we’re used to, so that’s exciting in itself.

“We’ve got a different line-up from last week and I’m looking forward to it. Obviously, Rebecca’s playing very well after her win last week in Scotland and Lauren as well.”

While Muirhead took responsibility for her team missing out on reaching the final at the Euro Super Series, she feels that every member of the nine player squad should be travelling with confidence.

“I’m actually pleased with the way we played,” she said.

“We obviously lost just one game, but it was a crucial game that semi-final, which we controlled, until I unfortunately missed that last shot which caused us to bow out of the competition and give up a steal. But I think we can take a lot of positives from it into St Petersburg with a chance to re-start and refresh going into the international European circuit.”

The three-time Olympian is keenly aware that every performance now matters more than ever in the bid for places in the team that will compete in this season’s forthcoming European Championships and, most importantly of all, the Olympic qualifiers with team coaches Nancy Smith and Kristian Lindström joined by Olympic Head Coach David Murdoch and British Curling’s sports psychologist Misha Botting in the backroom team.

“Obviously, the prospect of the Olympic qualifiers is looming and it is important that everyone stays motivated, which I think is the case,” said Muirhead.

“Playing in that event last week, you can see everyone’s very determined and fighting for their spots, so this is an event the coaches are going to be looking at very closely… so I think it’ll be a great event. 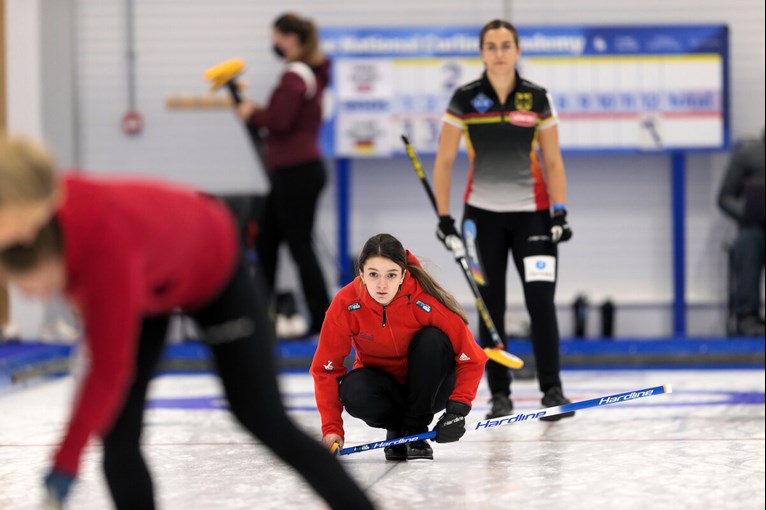