Award winning Scottish Brewery Cold Town Beer has offered its backing to British Curling’s Paralympic Curling squad with a new sponsorship deal ahead of the most challenging year in the sport’s history, which will see them compete in both a World Championships and a Paralympic Winter Games in the same season for the first time.

The deal with the Edinburgh-based company, which will provide athletes with training and travelling kit, was announced immediately ahead of their opening tournament of the 2021-22 campaign, the inaugural Euro Super League (ESL) which gets underway at the National Curling Academy tomorrow (27-29 August).

The deal is the first of its kind involving the wheelchair squad, reflecting rising interest in Paralympic sport and two-time Paralympian Gregor Ewan welcomed the support as a major boost for the squad.

“It is the first time the wheelchair squad has been sponsored and it really does show the growing profile of Paralympic sport and it is great this is happening as we are supporting our summer athletes in Tokyo just now,” he said.

“The Paralympics continues to build its support base around the world and it is nice that our sport is getting this recognition as well as the support we get from the programme. This new partnership will make a huge difference to all of us and we are always incredibly grateful to get the support that helps us to perform when it counts.

“It is a real confidence boost just as we are about to start our new season and we are all now really excited about the weekend ahead.  Taking on our international rivals in a brand new event combined with this new support is a great way to start our season which will build towards the pinnacle of our game at the Paralympic Games in Beijing in 2022.”

British Curling’s Executive Performance Director Nigel Holl echoed those sentiments, noting that the benefits of sponsorship extend well beyond the deals themselves.

“As events get underway in Tokyo the ever-increasing level of interest in Paralympic sport is hugely encouraging and this new sponsorship with Cold Town Beer reflects that,” he said.

“Support like this is extremely beneficial, not only in terms of the direct benefits of the deal, but in helping build the confidence of our athletes since it offers recognition of the impact their efforts can have.”

“We’re extremely grateful to Cold Town Beer for the backing they are giving our squad as we head into the most intense season our wheelchairs curlers have ever faced,” she said.

“With both a World Championships and a Paralympics scheduled this season, we are working hard to bring further success for British Curling and Paralympics GB and every bit of help we receive can make a vital difference and we are proud to be associated with a local company like Cold Town Beer.”

Euan Bain, Brewery Director for Cold Town Beer said they had offered their sponsorship after identifying with way that wheelchair curlers tackle challenges.

“We were attracted by the British Curling Paralympic Wheelchair Curling Programme due to their work ethic and commitment to striving towards their goals. They have targets, specialists to help get them there and a fantastic and talented squad whose key focus is to overcome any adversity and be the best that they can be,” he said.

“We really applaud this and we’re so proud to support it. We have thoroughly enjoyed spending time with the squad and the programme who are doing amazing things in their field.

“As a brand Cold Town Beer strive to do one thing – create amazing beer and push ourselves to the limit of our brewing capabilities. So, whether it’s a gold on the podium or a gold standard brew we’d like to think that this is a sponsorship of likeminded individuals trying to achieve their goals and having fun along the way.”

There will be live streaming from the ESL event which gets underway tomorrow afternoon:  https://www.youtube.com/c/britishcurling

*Teams are subject to change up to and also throughout the event. 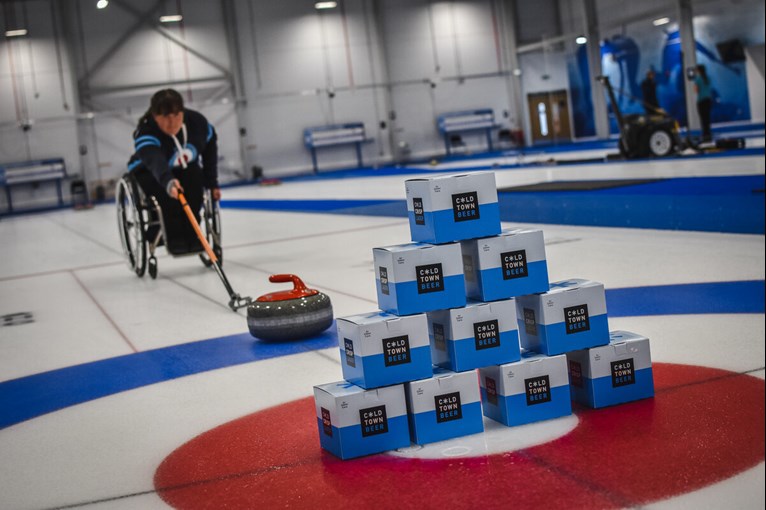