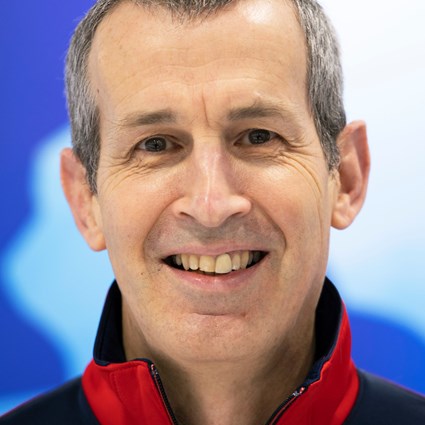 David Aitken took over as British Curling’s Performance Foundation Manager in 2020, having joined the programme’s performance coaching team in 2019.

As a competitor he skipped Scotland to victory at the World Junior Championship in 1986, edging out a team led by Kevin Martin, the man now considered to be the greatest skip in the history of the sport, in the final in the opposition’s native Canada.

As a coach he has taken teams to nine World Championships and curling is very much a family business. His oldest daughter, Gina, is currently skipping a team on the British Curling programme, having previously competed at five World Mixed Doubles Championships and, like both her sisters, Karina and Tasha, at the World Junior Championships, while their mother Morna has competed at two World Senior Championships.
Aitken has also enjoyed a highly successful career off the ice, graduating from Stirling University with a BSc (Hons) in Computer Science and going on to become founding and technical director of Data Discoveries Ltd in 1995.

Following its acquisition by GB Group in 2011, he continued working with them, taking on groupwide project and product responsibilities, before taking the opportunity to move into coaching on a full-time basis in a role that now sees him provide a key link between Scottish Curling Academies and British Curling’s Olympic programme.

That background in the software industry combines well with the experience gained as a technical and team coach at all levels of curling over the past decade, to bring substantial added value to his role in developing a performance pathway for British Curling and as a member of its senior leadership team.